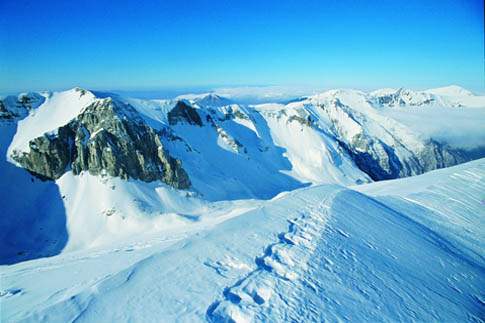 The Monti Sibillini National Park has obtained postive evaluation by Europarc Federation ; therefore it is officially recognized by the European Charter for sustainable tourism in protected areas.

The great limestone massif that stands in the southern Marche includes one of the highest peaks on the Italian mainland - Monte Vettore at 2,476 metres - and the wild tarns and windswept high plains of the Monti Sibillini provide some of the Marche's most spectacular landscapes. Established in 1993, the National Park of Sibillini Mountains covers an area of over 70,000 hectares of protected land. This chain of mountains is chiselled by glaciers and limestone erosion; the traces can ben recognized in Mount Vettore, Mount Bove, the Ambro Valley , Tela Valley (Mount Rotondo) and in the underlying U-shaped valleys. Karst phenomena is particularly evident all around the area.

The Park possesses some outstanding natural sights , including the vast upland plains which are a mass of flowers in spring. The most impressive is Piano Grande below the village of Castelluccio, famous across Italy for its lentils. In May and June, this huge expanse of treeless plateau, 1250 mts above sea level, eight kilometres long and five wide, is transformed into a carpet of wild flowers. Among the poppies you'll find wild tulips and exotic alpine flowers such as carex buxbaumii. Different types of trees can be found in the park : the oak, the hornbeam , the beech , but also natural pastures with very rare and valuable species such as the edelweiss of the Apennines and the willow dwarf, that is considered the world's smallest tree. The fauna is also varied; there are different mammals, such as the wolf, the wild cat, the hedgehog, the roe deer; some birds populate the park too: the golden eagle, the goshawk , the sparrow hawk and the peregrine falcon.

In the Middle Ages the Sibillini Mountains were known in Europe as a kingdom of demons, necromancers and fairies. There are many legends on the Sibillini area that have been handed for centuries: the mountains take their name from a legend that one of the sibyls - the prophetesses of classical mythology - hid here in a cave on Monte Sibilla known as the Grotta delle Fate (Cave of the Furies) when she was chased out of the underworld. We must also mention the legend of "Pilato", according to which the dead body of the famous Roman procurator was dragged by a team of oxen into the reddish waters of the "demonic" high tarn. The lake is also the only place in the world where you'll find Chirocephalus marchesonii, a pink crustacean that swims belly up.