Loreto and the Holy House 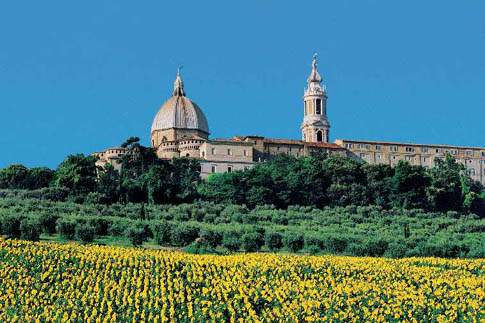 Province: Ancona
Name inhabitants: loretani
The town of Loreto developed around the famous Basilica that contains the “Santa Casa” (the Holy House of Nazareth) where, according to tradition, the Virgin Mary was born, lived and received the announcement of the miraculous birth of Jesus.

Tradition says that, when in 1291 the Muslims finally expelled the Christians from Jerusalem and then tried to regain Nazareth, a group of angels took care of the House and, after some wanderings, spreading their wings took it to Loreto. For this reason, the Madonna of Loreto is venerated as the patroness of aviators. Studies highlight that the origin of the House is Palestine in view of both the architectural style and the use of construction materials, unknown to the Marche territory and instead widely used in the Holy Land at the time. A recent theory, supported by the discovery of documents written after 1294, asserts that the transfer was the work of the Angeli Comneno princes, a branch of the imperial family of Constantinople, who carried the stones by ship. Both theories, in any event, concur that the House left Nazareth in 1291, passed through Dalmatia, remaining for about three years in Trsat (now a district of the town of Rijeka in Croatia), and arrived in Loreto on the night of December 9th-10th, 1294.

In 1469, on the initiative of the bishop of Recanati, Nicolò delle Aste and later with Pope Paul II, the first construction

of the present basilica began, first with Gothic and later Renaissance forms. In 1586, Pope Sixtus V appointed Loreto to the diocese and the bronze statue designed by Antonio Calcagni and Tiburzio Vergelli, that is placed in all its majesty next to the entrance of the Basilica, was dedicated to him. The octagonal dome was the work of Giuliano da Sangallo and was built in the years 1499-1500. The statue of the Virgin Mary, made of embossed and gilded copper, is on the top of the dome’s lantern. Next to the white Istria stone facade, completed in 1587, stands the elegant bell tower (1750-55) by Luigi Vanvitelli. The shrine of the Holy House is positioned under the dome, faced with marble and with statues and reliefs, a masterpiece of 16th century sculpture. The highly evocative interior is a destination for pilgrims who come from all over the world to pray before the statue of the Black Madonna.