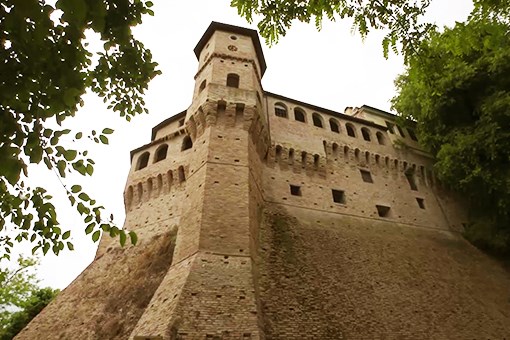 Province: Ancona
Name inhabitants: jesini
Jesi is one of the most beguiling towns in Ancona’s inland and boasts a sophisticated old centre and lively cultural life. As you arrive you must look at its most striking feature - a belt of massive 14thC walls, built on Roman foundations and later strengthened with buttresses and impregnable towers, and topped by houses. Piazza Federico II lies at the north-eastern end of the town where the Roman forum of Aesis once lay. Its name recalls the birth here of the fabled Medieval Hohenstaufen Emperor Frederick II in a tent on 26 December 1194. In Piazza Ghislieri is the Federico II Museum, a large multimedia museum dedicated to the emperor, documenting Federico's life and his stirring deeds. A few steps down Via Pergolesi and you will be in Piazza Colocci and in front of Jesi's most remarkable building, Palazzo della Signoria. This Renaissance palace was built at the end of the 15thC; the large rampant lion above the entrance is the symbol of the power the city once held. Piazza della Repubblica, Jesi's largest square, is dominated by the town's 18thC theatre, Teatro Pergolesi, home to a prestigious autumn opera season and named after the composer Pergolesi, who was born here in 1710.
On Via XV Settembre stands Jesi's most flamboyant building, Palazzo Pianetti. Apart from its hundred windows, the bland facade little prepares you for the over-the-top Rococo flourishes inside. The most extravagant part is the sugar-candy stucco work in the long galleria. The over-blown decoration alone would merit a visit; the added bonus of the civic art gallery makes it obligatory as here is kept a small group of some of Lorenzo Lotto’s finest works: the Judgement of Santa Lucia, a Visitation, an Annunciation and a restless Deposition. To find an exhaustive selection of Marche wines you can’t miss the regional “enoteca”, in the city historical centre, where you get to know the delicious Verdicchio, a white wine proudly produced in this area.
Among the main events, to be mentioned is the Palio of San Floriano and historical re-enactment: during the first week of May, the city plunges into the Middle Ages and in the afternoon of the Palio of San Floriano, the herald auctioneer announces the beginning of a rich calendar of appointments with history.